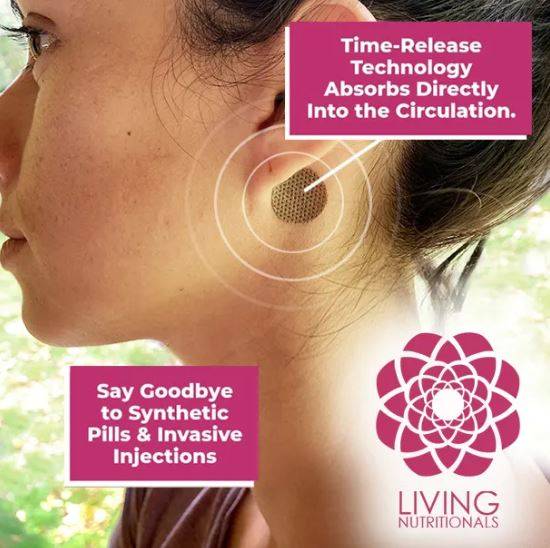 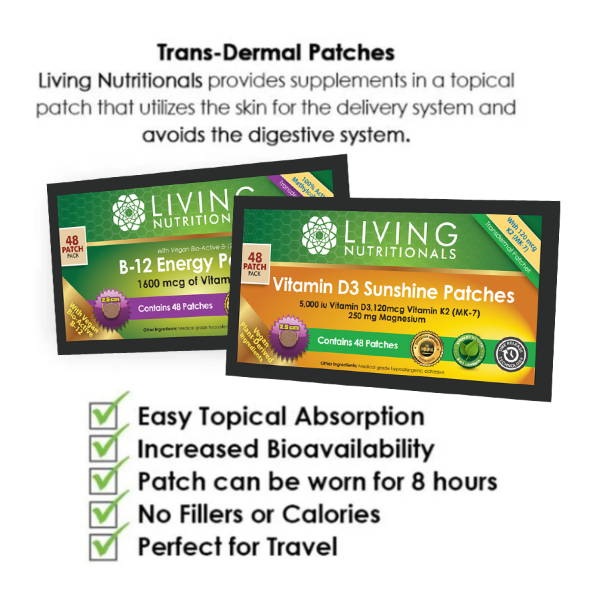 Higher Energy Levels, More Focus and a More Balanced-Feeling Nervous System, with a Sense of Calmness and Clarity of Mind.

B12 deficiency affects up to 15% of the population and an exponential number in the Vegan population. It is our privilege to offer products which can help mitigate this growing health issue.B12 is a key factor in producing Red Blood Cells and can be very difficult to source through foods on a Vegan Diet. The absorption of B12 occurs naturally in the stomach through “intrinsic factor” which is a protein made needed to absorb B12 in the intestines.

This can become a severe issue with those who develop pernicious anemia which prevents the production of intrinsic factor. If this is left unattended to it can beget megaloblastic anemia which is a condition wherein Red Blood Cells are abnormally large, immature, and low in number reducing the amount of oxygen that can be carried by the blood. Living Nutritional’s Vitamin B12 patches bypass the stomach completely by going direct into the bloodstream so for those who cannot process B12 through their stomach this is the perfect solution! (more info at bottom of the page..)

With our ground-breaking Vitamin D3 Patches, you don't have to worry about your absorption rate or keeping things under your tongue as with regular oral D3 supplements. You just put the patch right behind your ear and the D3 goes through your skin, right into your capillaries and releases straight into your bloodstream!

It's important to make sure that you are receiving and absorbing enough Vitamin D3, because it has been shown that a lack of it is linked to countless health conditions such as cancer, asthma, type-II diabetes, high blood pressure, depression, heart disease, infectious diseases, Alzheimer's and autoimmune diseases like multiple sclerosis, Crohn's, Rheumatoid Arthritis, type-I diabetes, and other conditions that cause soft, thin, and brittle bones in children and adults. (more info at bottom of the page..)

B12 has also recently been linked to decreasing possibility of infections by improving mitochondrial health. Mitochondria is responsible for cell respiration and energy production. If your mitochondria are not healthy they do not have the means to process nutrients into energy and nutrients which are not ideal for your cells will remain dormant in them instead of being evacuated.

An epidemic in the modern world that has been growing at an alarming rate is Dementia. Recent studies show that those with dementia frequently have an abnormally high amount of homocysteine in their blood.B12 can lower homocysteine levels in the blood which can be a possible link to the causes of Dementia. This is a brand new development which will take more time to investigate but the links are being heavily tested.It is now understood that young people with autism and middle-aged people with schizophrenia had brain levels of B12 around one third lower than people of similar age that did not have these conditions. The children in the autism study who were all under the age of 10, showed similar levels to those in a 57-year-old.

It is now being understood that not enough B12 clearly impairs the brain's ability to build essential neurological connections within regions.Low levels of B12 and folate have been found in several new studies concerning patients diagnosed with depression.A deficiency in B12 impairs the production of DNA by your bone marrow. DNA is needed to make and increase your white blood cells. White blood cells are what sets off the immune system's response to kill germs and virus’. Functioning without this response will make you susceptible to illness and infections.

Low levels of B12 can also activate alterations in DNA synthesis, which leads to DNA damage.One can always get some level of B12 from food. Because cobalamin (B12) comes from the intestinal bacteria of animals (by being first absorbed through the grass and fodder it eats), you will need to eat animal products, fish or eggs to get this vitamin from your diet.

But even if your diet includes animal products, you are not guaranteed to get the optimal amounts anymore.

Vitamin D improves absorption of calcium by the digestive system while K2 is responsible for directing the calcium into the bones...

A 2008 study compared the rate of coronary artery calcification between one group given Vitamin K2 and Vitamin D, and another only given Vitamin D. The group given K2 with Vitamin D showed significantly less calcification of the arteries.A recent Dutch study concluded that "a high menaquinone (Vitamin K2 as Mk-7) intake reduces the incidence of coronary heart disease."Dr. Rheaume-Bleue explains the importance of Vitamin K2: "When you take vitamin D, your body creates more of these vitamin K2-dependent proteins, the proteins that will move the calcium around. They have a lot of potential health benefits. But until the K2 comes in to activate those proteins, those benefits aren't realized.

So, really, if you're taking vitamin D, you're creating an increased demand for K2. And vitamin D and K2 work together to strengthen your bones and improve your heart health."Dr. Rheaume-Bleue further explains the importance of taking Vitamin D3 WITH Vitamin K2: "We don't see symptoms of vitamin D toxicity very often. But when we do, those symptoms are inappropriate calcification.

That's the symptom of vitamin D toxicity. And it is actually a lack of vitamin K2 that can cause that..."Our Vitamin D3 Sunshine Patches offer these crucial vitamins with the addition of 250mg Magnesium, to further promote healthy calcium metabolism. We feel that this is the most cutting-edge Vitamin D3 supplement on the market today! You get a balanced, time-released dose of Vitamin D3, Vitamin K2 (MK-7), and Magnesium all combined in an easy-to-use patch that delivers these vital nutrients directly into your circulation over a 48-hour period!